Today’s real estate market is in a slump. What this means, clearly, is that you should be buying.

If you’re willing to live in the middle of nowhere, here are a few very interesting ideas for homes:

Granted, you’d be an idiot to buy any of these places without looking carefully into all the costs and zoning laws, and I’m not sure any are in good locations.

My AthlonMP system is aging. Actually, it’s aged. It’s down to 512MB RAM (the other 512MB went bad a long time ago). BIOS updates ended 4 years ago, and the thing doesn’t seem to support drives over 137 GB or USB keyboards, two things that have worked for a long time. (Hint: it seems like a good idea at the time, but don’t buy a server-grade motherboard for your desktop. It seems better, but it’s all these little things that will get you.)

So here’s a motherboard. Here’s the processor. Here’s the RAM, times two. Net cost? A little under $500. For a quad-core processor, 4 GB RAM, and a motherboard with GigE. Assuming, of course, that all you need is motherboard + processor + RAM. Which is the case for me. Granted, it also assumes that you have $500 to spend on computer upgrades….

Edit: Seems that the RAM might not be the best. Don’t take my word on it being the right thing.

The other day I was feeling quite hungry and somewhat under the weather. So I headed to the convenience store on campus to grab a bite to eat and a drink. I learned that the “Amp” energy drinks are actually not that bad, although they’re ridiculously expensive. Sadly, my first thought when buying it was about strategic advantages in the energy drink industry. I think I’m spending too much time in classes.

And then I saw a microwaveable chicken chimichanga. How could you go wrong? I bought it and took it back to my room to eat as I watched Game 2 of the World Series.

Not until I unwrapped it did I notice three things wrong:

I’m pretty much an expert on zombies. I beat Dead Rising, and watched Shawn of the Dead the other day. (By the way, the catchy tune that is their themesong is The Blue Wrath by I Monster.)

So a few comments:

The more important thing, though, is the topic of what to do if there’s a big zombie infestation. There are three important considerations in selecting a location:

Anyone who’s seen Shawn of the Dead knows that a pub is a terrible place to go. There aren’t that many weapons (I guess you have plenty of bottles, corkscrews, and a Winchester with 29 shots, but that’s not really enough), it’s not at all secure, and there’s not much to live off of. (Just peanuts!)

Dead Rising takes place in a mall. That’s not bad. But I’ve found something even better: Costco. They have big huge gates (like garage doors) that they close at the end of the day, so it’s hard to get in. There are a ton of skylights on the roof, but they’re so high up that if zombies come through them, they’ll plummet to their death. There’s an ample supply of weapons, and, of course, a ridiculous amount of food. There are also beds. (Though if you’re alone, you might not want to sleep, lest you wake up and find your brain being munched on.) And plenty of little rooms like coolers and a kitchen where you can hide out.

It’s best to be with others, but beware the apparent tendency for them to become psychopaths and try to kill you. It’s best, then, to keep the best weapons for yourself and to sleep with one eye open.

If you’re not a Costco member, I’d imagine that a BJ’s or Sam’s Club could work. Heck, even a Wal-mart would probably do. But if you want to stick with my recommendation, you can sign up for Costco here. Note that it’s possible that, in the event of a zombie invasion, the lady checking membership cards at the door may be absent, so if you’re near a Costco but aren’t a member, you may be able to get in.

Do be warned, though, that if I beat you there, I’m shutting the gates. So when the zombies come, rush to Costco. Coincidentally, there’s one in Nashua and one in Waltham, so I’m always near a Costco. (Why do you think I picked Bentley?)

You may want to print this guide out and keep it in your glovebox, by the way. Internet access can’t be guaranteed in a large-scale zombie attack.

I’m home for the weekend, and stopped by the Turkey Hill Cemetery. Got some nice shots, perfect for Halloween. It’s funny how much of an effect the post-processing can have… Here’s a shot in black and white, with a little glow added: 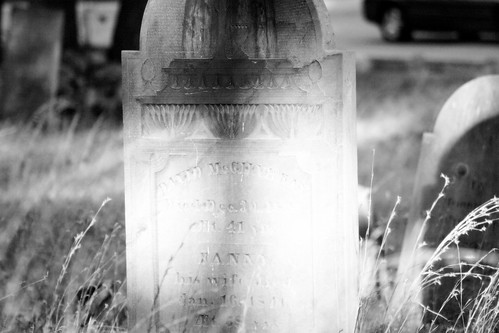 And here’s a shot in color: 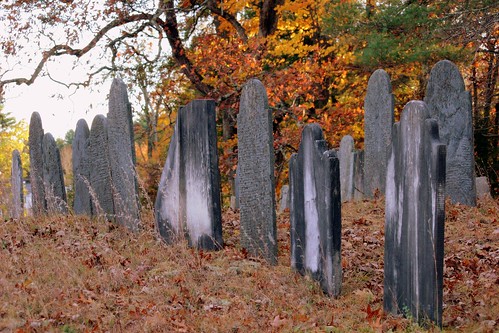 This marks the second time, by the way, that the 10D’s AE has gone wonky and I’ve had to switch over to full-manual mode.

Posting this in the hopes that it’ll be useful to someone else, because it certainly took me a long time and caused a lot of frustration.

There’s a bizarre bug that a few people, myself including, have run into when upgrading to Ubuntu’s Gutsy Gibbon release: the applications menu is blank.

Some recommended deleting ~/.config/menus/applications.menu, but, in my case, this didn’t recreate it.

Here’s a tip, though: there’s an /etc/xdg/menus/applications.menu. Copying it to ~/.config/menus/ fixed my problem. And now, I have an applications menu. Hurrah!

Going through the circulars, here are some more incredible deals:

Let the Democrats continue bashing each other in public, ensuring that, post-primaries, whoever wins from the Democrats already has egg on their face, thrown by another Democrat. The Republicans won’t even have to run attack ads.

And Republicans, don’t worry. It seems that we’re well on way with this plan. Just sit back and watch as we talk ourselves out of the White House.

In business, and really just life, it’s important to plan for the long-term.  In a lot of publicly-traded companies, managers have incentives to manage for the short-term: if they boost the company’s numbers for the year, they get huge bonuses. The plan doesn’t account for the fact that they may well have gotten there by sabotaging the company’s future.

But the long term is different from the absurdly long term. I’m sitting here reading an article about how Merrimack needs to replace its manhole covers. There are two plans; one is very expensive but will last us 50 years. The other is significantly cheaper, but there’s a chance that, in a couple of decades, they might need to be replaced again.

I guess the right way to look at it is the total cost over time. But frankly, in 20-25 years, I’m going to be in my 40’s, and probably not living in Merrimack. I’m not going to think, “Man, I wish we’d spend more on manhole covers.” I won’t even remember that we replaced them 20 years ago.

One of my classes this semester is called Strategic Management. Some classmates presented their “strategic recommendations” for a golf company. One of their plans was aimed at growing the company’s market share over 100 years. I had to choke back my laughter when they said this.

It’s important to plan for the future. Doing something that you know will endanger your company in the future is a bad idea. You always want to be thinking of the future. But how can you know what the golf industry is going to be like in 50 years? How can you know what the economy will be like? For a five-year plan you can infer that it won’t change too much, besides a little technological advancement. But if anyone ever gives you a 100-year plan for their company, I encourage you to crack up laughing. I almost did, at least.

Kyle’s ending sentence reminded me of something I’ve noticed before: we at Bentley are not normal. Even those of us who aren’t obsessed with starting the next big company still have business on our minds all the times.

The other day one of my friends here remarked, “I want a Gap T-shirt.” Or at least, that’s how you’d have heard it. But what we heard, especially since a lot of my friends here are accounting majors, was, “I want a GAAP T-shirt,” which is actually what he meant. He just said it and we all cracked up laughing. I think I’m going to try to whip one up in Photoshop.

I came across this book on Amazon today. It’s called “Amtrak Privitization: The Route to Failure.” And my first thought was, “That’s not at all what I’m looking for,” (I was looking for a book about car maintenance by someone with a similar name), “but it sounds really interesting.”

The problem is, if you asked a sane person what their opinion of the book was, I think they’d tell you that it was the most boring topic they could imagine. And here’s another book that makes the opposite argument: the government should ditch Amtrak and let the private market “fix” it.

Of course, Railroad Law a Decade after Deregulation doesn’t grip me quite as much, especially at 50 cents a page.