For a while now I’ve read about software-defined radio (SDR), but as an academic pursuit, or as something very expensive. It turns out that I was way misinformed, and you can get in on the fun for $25 ro so as long as you have a computer with a USB port.

As the story goes, tuners like these were originally cheap USB TV tuners. They cut costs by doing much of the processing in software instead of hardware. And, well, that’s software-defined radio! The fact that they were TV tuners had some other nice effects: the TV bands are all over the place, and each TV signal is a few MHz wide, so these are in fact broadband SDRs capable of capturing a couple MHz of spectrum concurrently. And that’s awesome for us!

Here’s the one I have; the specific model is no longer made, but it uses the same R820T tuner that current models support:

On Linux I use rtl_fm for tuning, but on Windows, I use SDR Sharp. And on the Mac, I use gqrx, also available on Linux.

Here it is in action:

(Sorry for the photograph of a computer screen. That’s my old radio-programming laptop that needs to stay on Windows XP, so I intentionally keep it off the Internet.)

You can see it’s tuned to 162.525, which is WNG575, my nearest NOAA weather radio station. SDR Sharp is giving us a spectrum scope view, which is pretty handy.

The receiver has adjustable gain, from 0 to about 47 dB. It’s not abundantly clear to me how this relates to regular receivers; it seems like the 0 dB setting is pretty deaf compared to most of my other radios, but at 47 dB it’s definitely got some gain on the others. The spectrum scope is especially useful for seeing the effects of gain, though: as you increase gain, the noise floor goes right on up with the signal. (This is, of course, not surprising, but it’s a great visual explanation of why you don’t always want a powerful preamp.)

You’re probably not particularly interested in which weather stations I can receive, but the spectrum view is quite handy.

And here it is during a linked traffic net on the ham bands: 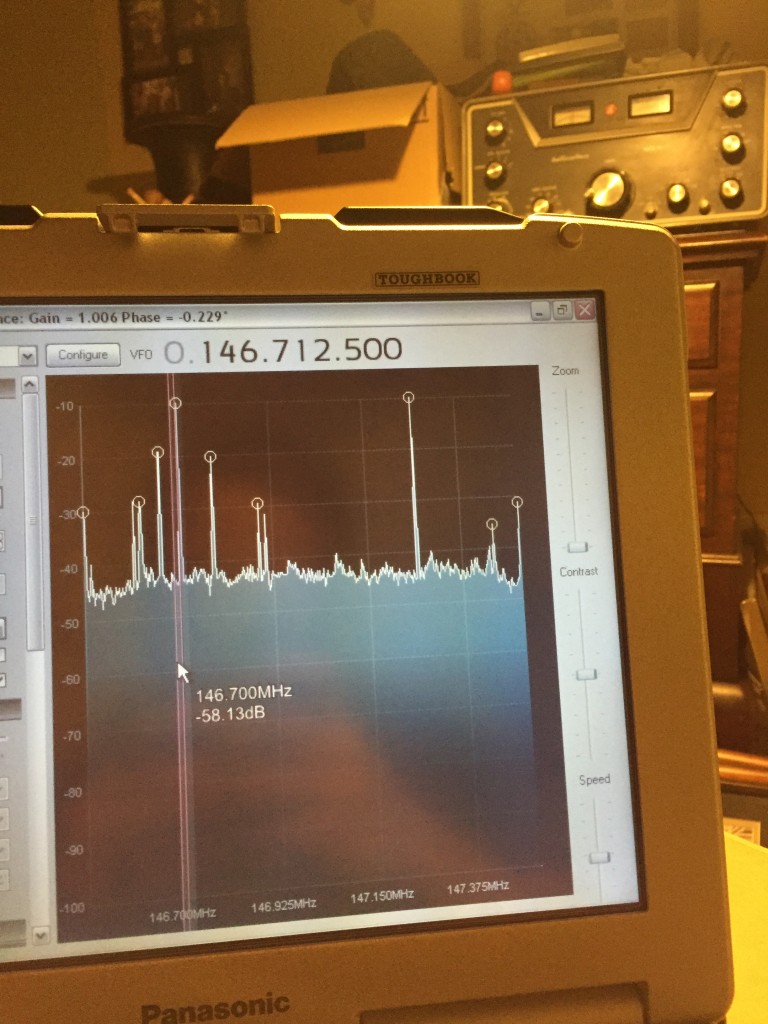 With the GP-15 I just put up, I’m seeing a number of area repeaters active — plus some noise!

The thing isn’t perfect. As an extremely wideband receiver that is so small that I could literally swallow it, it seems to suffer a bit more than other receivers with strong noise and intermod. I receive ghosts of signals in odd places on the band, seemingly related to the bandwidth I sample: at the 0.25 Msps mode, I often see images duplicated 1 MHz off their true frequency. The 0.9 MHz view is more confusing. But, for the cost, and the features that a receiver costing 20x as much doesn’t offer, I’m willing to put up with that.

Oh, it also gets kind of hot, especially as you crank the gain up: 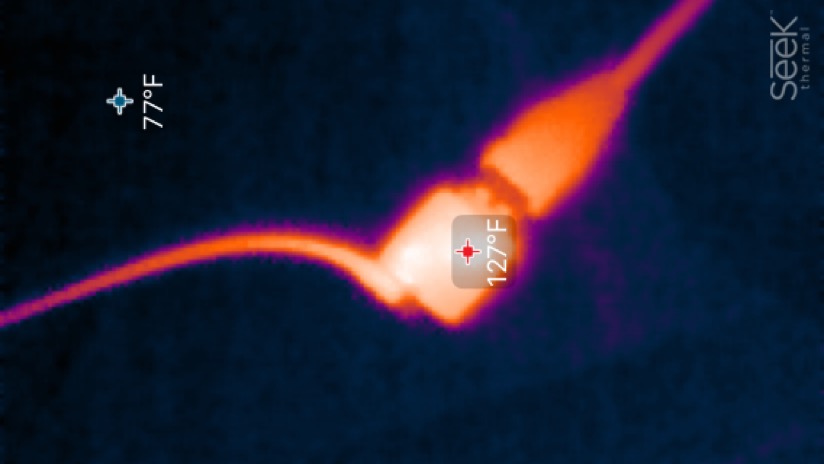 That also points to another problem, in that it often has some frequency error, which seems to vary a bit with temperature. I’ll often have to dial in about 30 ppm correction, and then back off that as it warms up. But, like the performance in noisy environments, that’s a problem I can put up with.