Last week, I had to have my car towed into the shop—and then from there to the dealership. (It felt sort of like when someone is taken by ambulance to a local hospital and then taken by medical helicopter to a larger hospital.) The dealership didn’t have any loaners, so they called Enterprise.

Now, Enterprise isn’t a bad company, and their cars aren’t necessarily undesirable, but no one bringing their car to a BMW dealership is hoping for an Enterprise rental. Like any other rental company, the car is always a little tin can that somehow doesn’t have GPS in 2018.

So imagine my surprise when they gave me the keys to this: 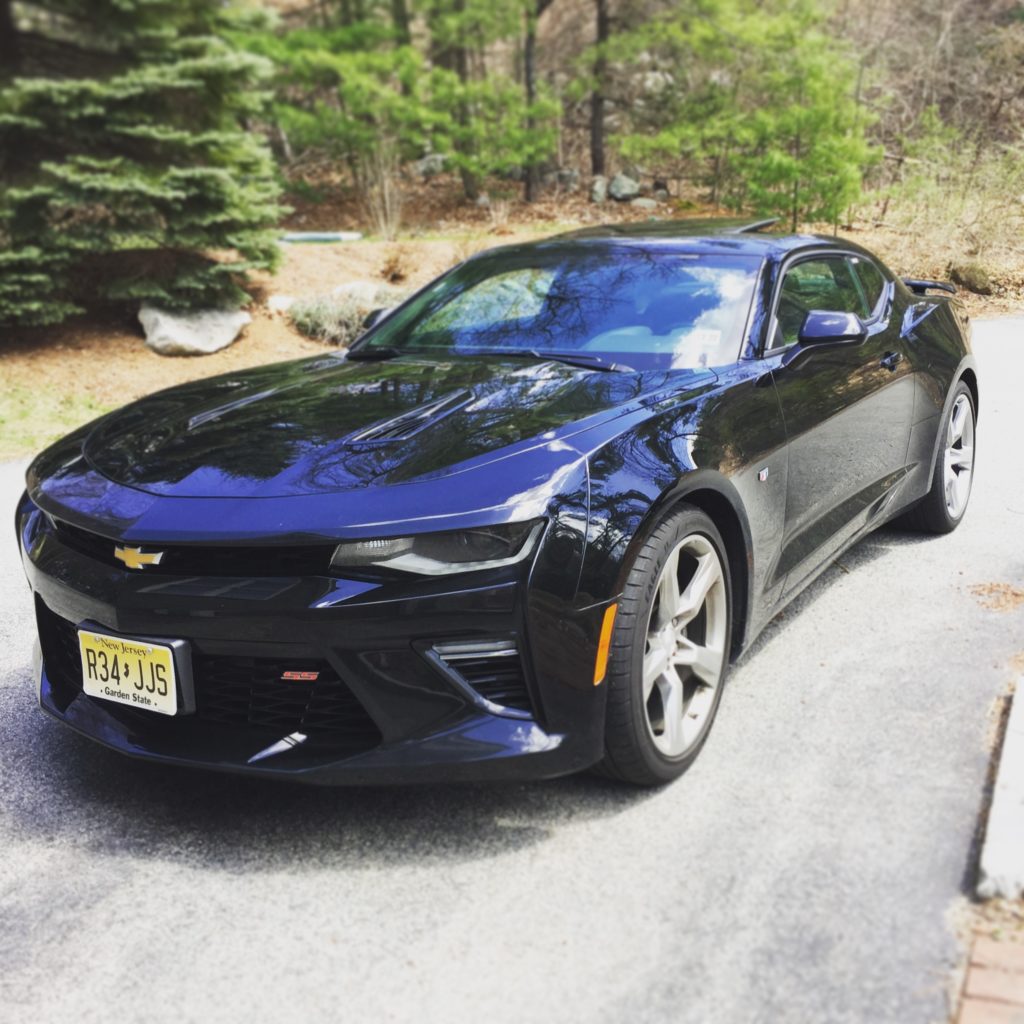 I didn’t know much about Camaros, but it turns out that, even more improbably for a rental car, this was one of the good ones, the Camaro 1SS with a V8 making 455 horsepower. Sitting in the driver’s seat with the Enterprise employee in the passenger’s seat as we completed paperwork, it was hard to contain my grin as I pushed the start button and the car let loose a throaty growl.

Once I filled out all the paperwork promising to treat the car gently and the Enterprise employee took off, I tried to at least leave the lot before doing all the things I said I wouldn’t. In my car, you need to give the pedal a fair bit of pressure when the light turns green. I almost think of it as slack in the pedal. Of course you don’t slam the pedal to the floor, but if you’re too ginger, people are going to start honking. Getting a heavy car rolling takes a bit of gas.

At first blush, the Camaro seemed the same. Give it a tiny little bit of gas, and the engine doesn’t deliver much power. So you do what I do in my car—give it a fair bit of pressure. And—oh shit!—that’s how I peeled out of the lot. With way more power than I expected, I let off on the gas in a panic, leaving me rolling through the intersection slowly and looking even more like I shouldn’t be trusted with this car. It didn’t take long to find a better balance, but it certainly wasn’t a great start.

Driving is a blast, though. It’s loud, and packs an awful lot of power. Whether it’s driving around town or passing a slowpoke on the highway, it doesn’t take much to get this thing going, and it’s hard to not have fun while doing it.

An interesting thing I discovered is that the car seems to shut down half of the cylinders when you’re cruising along at a steady speed, which is probably why the thing gets more than 20mpg: 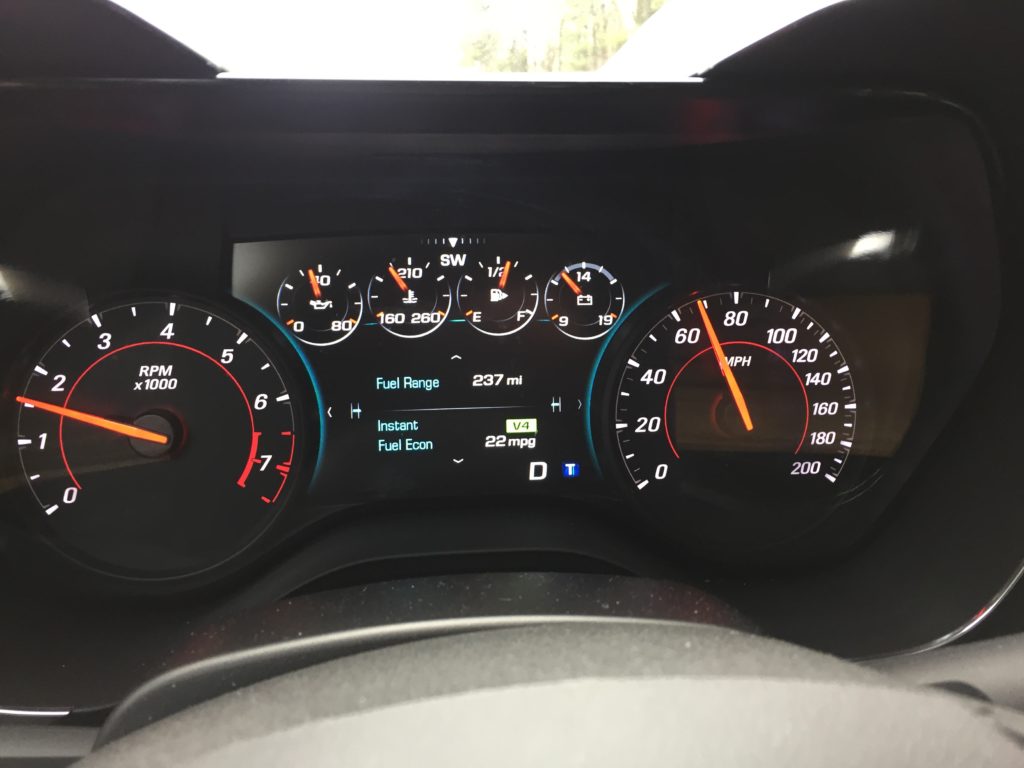 (I don’t know who took this photo, but I’m sure they were on a dyno.)

But go to pass someone, and those extra cylinders come back in the blink of an eye. You’d never know they weren’t running if not for that screen showing it.

The specs show a 0-60 time of about 4 seconds. I didn’t dare try to run a timer while pinned to the back of my seat on the onramp, but I don’t doubt that number. I never got to the end of an onramp wanting for speed, but did often have to let off the gas long before the end because I had surpassed 80.

The ride wasn’t _un_comfortable, but you definitely felt every little bump in the road… And New England roads aren’t exactly smooth in early spring.

I had no trouble with headroom, but the car does sit quite low which probably helps. Audio controls on the steering wheel help you keep your eyes on the road, though I missed the volume controls my car had. The steering wheel felt like leather, imitation or not. The bottom of the steering wheel is squared off for reasons I don’t entirely follow; perhaps to help with legroom getting in. It was a little odd turning into sharp spaces where the steering wheel wasn’t round, but I tend towards shuffle steering so it didn’t come up too often.

A decently-sized LCD in the center console shows everything, from music to climate control settings. Climate control has dedicated hardware buttons, and adjusting temperature or fan speed is done by turning those huge center vents. An overlay on the LCD simply shows where they’re set. The screen has a slight downtilt which seems to prevent the glare that plagues my car’s center screen.

In the instrument panel, the tachometer and speedometer are both large analog meters. Their layout is the opposite of a BMW, but it’s not like it’s hard to figure out which is which. The gauges in the middle are digital displays styled to look like analog meters. A compass readout is front and center, and was just a tad distracting while turning. 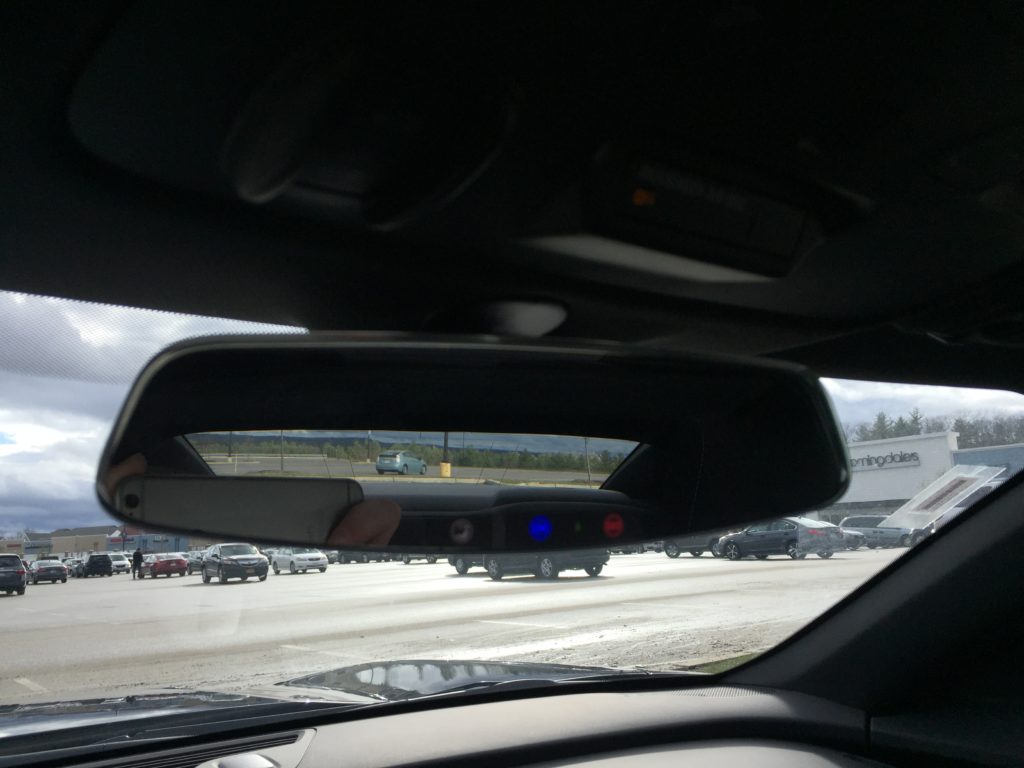 The rearview mirror was adequate but remarkably small. At the same time, that also describes the rear window, so perhaps they’re paired well. Flipping the mirror to night mode is done by hand (soooo 2015!), and the button is recessed directly behind the OnStar button. Pressing the OnStar button by mistake makes a loud chime that will freak you out. (Ask me how I know.) 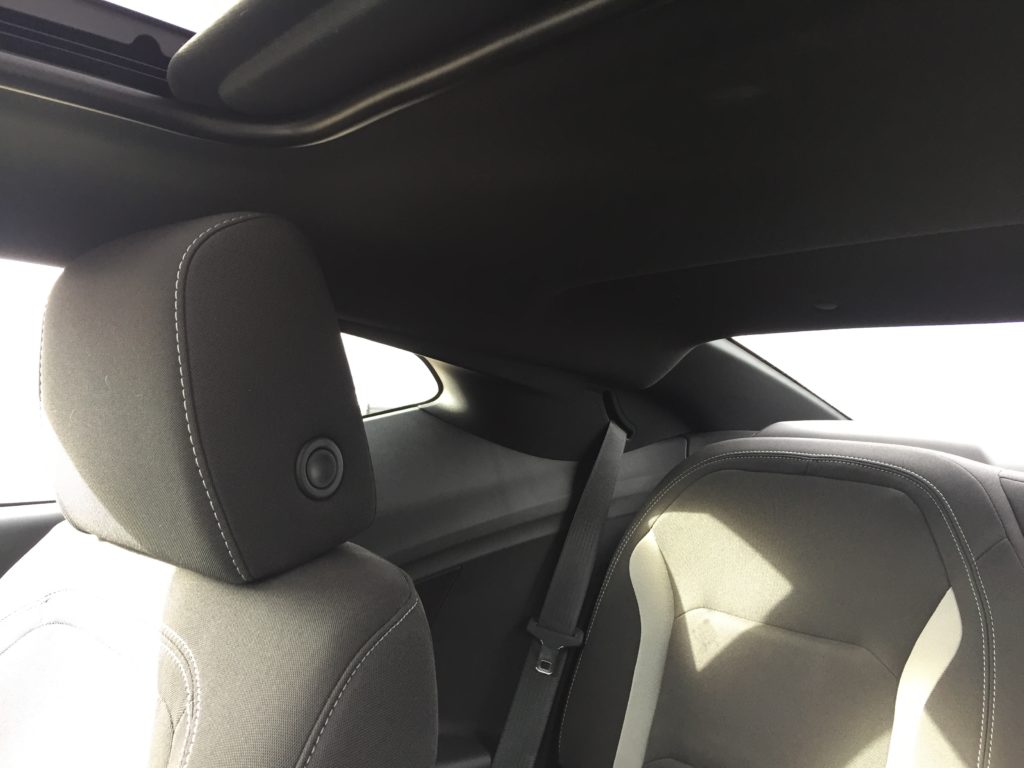 Visibility overall is poor. The front windshield is remarkably short, but gives an adequate view of the road ahead. Side visibility past 90 degrees, though, is atrocious. Trying to take a sharp left while watching for traffic from the right required crazy contortions with my head against the windshield to see past the passenger’s seat. You need to have your mirrors adjusted correctly in this, because peripheral vision is poor.

One review called the rear seats “vestigial,” which is the perfect word to describe them. I used them as a shelf to hold my umbrella. “Legroom” in the rear is comical; reaching to get my umbrella when it slid onto the floor, I didn’t have enough arm room to pick it up. Perhaps if the driver and front passenger have very short arms and legs and pull their seats way forward, you could seat four if the rear passengers were emaciated. I really can’t imagine when you could fit anyone in the back, unless they were maybe in a car seat. (And if you’ve got a toddler, I humbly submit that perhaps a Camaro isn’t the right car for you at this stage of your life.)

In short: having the Camaro for a weekend was a blast. And I certainly wouldn’t mind having one as an occasional fun thing to drive. But by the time my car had two functioning axles again on Monday, I was happy to get something more practical back. Visibility and comfort are surprisingly important.