I printed a few photos from the Ghana trip at the kiosk in the local CVS. The pictures came out great.

QOOP.com is partnered with Flickr, where I upload all my photos. Oddly, it seems you must be logged into an account at one of their ‘partner’ sites to even see their offerings, so I can’t link you to anything. (And, infuriatingly, site navigation is accomplished via something other than standard HTTP, so hitting “Back” takes you to wacky places. Plus, clicking just on whitespace, which I apparently do fairly often, takes you random places.)

But anyway! I’m tempted to try out some of their products with some of the photos I’ve taken. I think this would make a really cool print, for example. $15.99 buys a 16×20 print. They go up to 30×40 for for $39.99. (The goal is to merge lots of photos, but you can do it with a single one too.) Oh, you can apparently just get prints in the same sizes for the same price.

I think I want to try a 16×20 print of the Boston Skyline. (Maybe that’s the Charles River and not Boston Harbor?) I think I’ll wait for my eBay auctions to complete first, though, since I feel like I’ve been burning through money lately.

From the, “I have no idea how I wound up at this website, but…” files, a neat tale of some people waiting for a train in NYC.

I’d really like to get into the mind of vandals.

Tonight I was poking around Wikipedia and noticed that someone had just vandalized one of the pages. I reverted it (super-easy!), and then did what all good denizens of Wikipedia should do: I looked at the guy’s changes. He’d vandalized several other articles, all basically stating, “I’m going to keep vandalizing until you ban me.” (He got banned about 3 minutes later.)

It’s incredibly easy to revert vandalism. Do they not realize how easy it is to undo what they do? (Some guy at work one night wrote in Sharpie all over the bathroom. I was so disappointed that he wasn’t there to see that it took us about three seconds to completely remove it.)

But why do they do that? It’s Saturday night. I feel kind of pathetic for happening to poke around Wikipedia. But it’s not as pathetic as pointlessly vandalizing Wikipedia articles. In fact, of all the pathetic things I’ve done, none have been as pathetic as that. What makes these people tick? Do they like the attention? Do they take delight in it?

So yesterday I went into Boston to take some pictures, and last night I brought out the tripod and did some long exposures. The 10D shines at night exposures: a lot of cameras get very noisy on long exposures. This one was clean as a whistle. (A saying which really doesn’t make a lot of sense to me?) 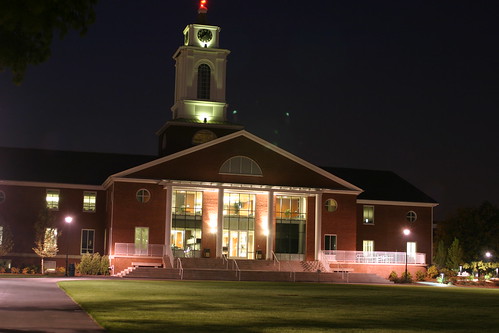 Note that the martians above the library to the right of the clocktower are actually just the crappy UV filter on the lens reflecting light. 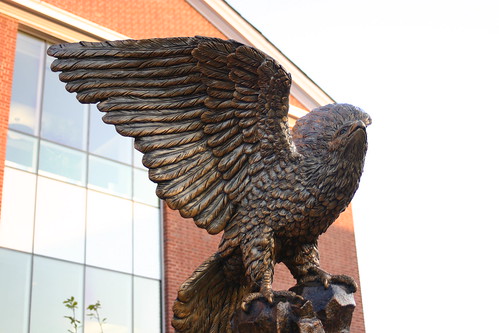 That’s with the other camera, the 300D, that I’m trying to sell. 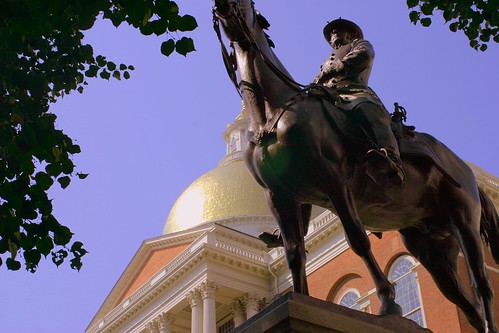 General Hooker outside the Mass Statehouse. (Note that there’s strong evidence that he didn’t inspire the slang term for prostitutes: “hooker” was in use before he came to fame.) 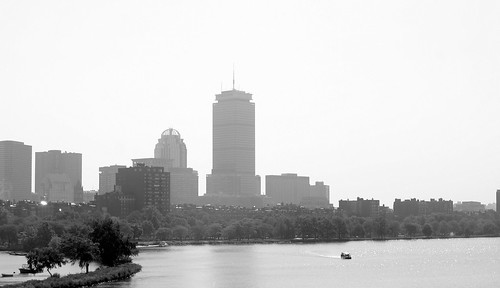 Shot out the window the T, and now my background. 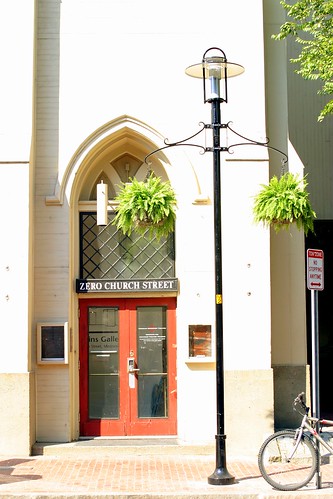 A church in Cambridge. I’m not sure why I like this shot so much.

It’s just awesome to take pictures and have them come out alright! (Although, really, I still have some practicing to do… I have an awful lot of unpublished bloopers, too.)

The cameras arrived today… Some first impressions… The 10D is big. I have one of the larger ‘point-and-shoot’ models that Fuji makes. But this thing is way bigger. It felt kind of awkward carrying it around. It’s not uncomfortable to hold or anything of the sort, it’s just big. It’s also pretty heavy. The 300D is considerably smaller and lighter. Between the silver color, the light weight, and the fact that something rattles, it feels much cheaper, though.

It just feels like a ‘real’ camera. You take a picture and the shutter sound is actually the shutter, not a cheesy sound effect that only plays when I forget to mute it. With a ‘real’ sensor size, I’m not cursed to always having everything in focus. (Which sounds desirable, but tell me you’ve never wished the background was blurred.) Using the preset modes, the camera seems predisposed towards popping up the flash when I least expect it, but it’s usually necessary.

I haven’t yet figured out how to change ISO settings. The 10D officially goes to ISO 1600, but allows an ‘expanded’ ISO setting of 3200. It’s pretty clean at that point, too. Most cameras get extremely noisy/grainy. The 300D goes to ISO1600; I played with it briefly there and it’s kind of noisy but still decent. Staples had a 1GB CompactFlash card for $13, before a $5 rebate, that I picked up this morning.

The lens it shipped with (used, not standard) is a 35-80mm f/4-5.6 lens. It’s halfway decent. The thing is that both of the cameras are the ‘APS-C’ sized sensors, which aren’t full frame, so they only capture the center of what’s coming through the lens. Therefore, there’s a 1.6x ‘crop factor.’ In layman’s terms, you’re ‘zoomed in’ an extra 60%. So the 35-80mm lens becomes a 56-128mm lens. I’d prefer something wider for general use, but it’s a free lens, so I won’t complain too much yet. I took it off to move it to the other camera, and noticed that it’s extremely light. Which, at least in lenses, isn’t really a good thing.

What would a camera ‘review’ be without pictures?! 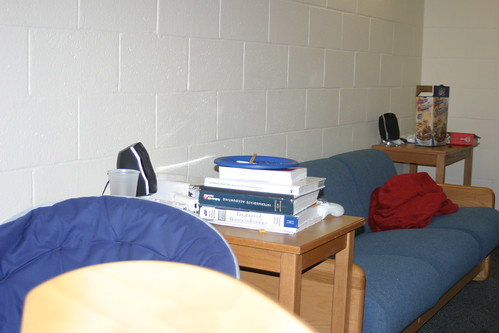 It’s a really lame picture, but it’s the first one so it’s obligatory to include it. Note the overexposed portions as the flash popped up. 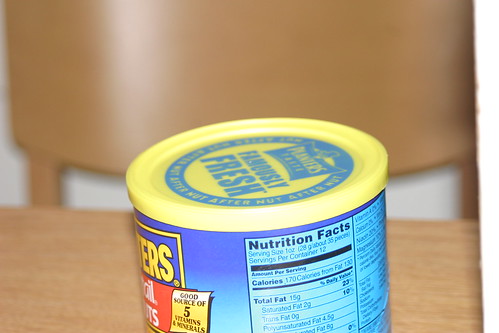 This isn’t a remarkable picture either. But it shows one thing that I’m already loving: the shallow depth of field. (Of course you can use smaller apertures to overcome this.) I can’t tell you how many times I’ve wanted to take a picture and have the busy background be thrown out of focus. I was resigned to shooting in macro mode which kind of did it. Now it’s the real deal. 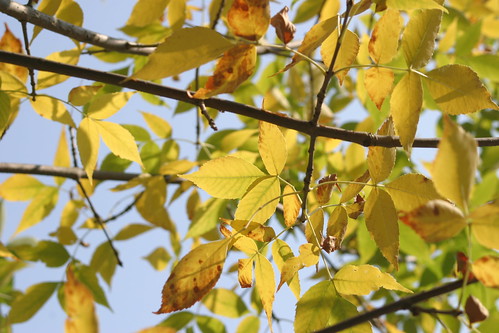 Getting better, though it’s still nothing I’d frame. This one was testing something else: macro mode. (Actually, I hadn’t yet discovered that the camera had a macro setting. I just wanted to see how close I could focus.) I can’t get half an inch away, but this is plenty close for most sane things. 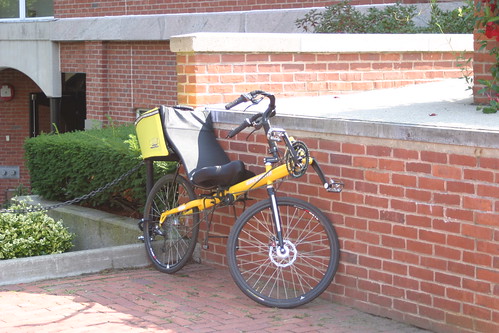 I thought that bike was kind of neat. This wasn’t necessarily meant to showcase any special features, although I will note that nothing seems lost in the shadows. (I’ll also note that these photos are straight out of the camera: most people, regardless of camera, will do some tweaking first. I just put them straight up. So they could all be even better.)

I’m no economic nationalist, but this is, umm… bad.

I was just reading something and realized… Three common ‘problems’ in America are pollution from all of us driving our SUVs, we’re all getting obese, and we’re using ridiculous levels of oil even as it becomes absurdly expensive.

Kyle was raving about Mint this morning. I just came across it on Digg and looked into a bit.

It’s got a very attractive website, and PC World raves about it. It’s sort like Quicken, only Web 2.0 based, and very, very spiffy. And free.

It’ll keep up to date for you and everything. All you have to do is put in all your bank account numbers.

I’m very eager to try this service. Except that I steadfastly refuse to put all of my bank account information into a website. Especially a startup one. If Paypal provided it, I might trust it. If my bank provided it, I’d definitely trust it. But a startup? Honestly, I think it’s safe and secure. It’s got some big names behind it, and it looks too ‘big’ for it to be one scammer. But that doesn’t mean I’m in a hurry to give them all my financial data.

I have a lot of business ideas that are extremely well-thought-out and that would almost certainly be great. These aren’t them. These are kind of vague ideas. But I think that they could be very successful, too. The reason I propose them isn’t because I want to make a lot of money with them, it’s because I wish these businesses existed. (So feel free to steal these ideas!)

The first two businesses are the better ones, I think. Both would be best if they had fairly low margins, but I think they could make a killing on volume. If a bank opened up that paid you, say, 2% interest on any money you had in your account and didn’t spring unexpected fees on you, wouldn’t you consider switching? (2% interest is moderate.) And if I were to buy a car, especially having never done it on my own, I’d feel much better going to a place that just had one price, as opposed to trying to bargain over a price. (The other element is that the sales staff would be honest, friendly, and helpful.)

The last two are more of a stretch. There’s considerable expense in picking things up, and laundromats probably don’t make a killing anyway. A pick-up laundry service may not be profitable, and I don’t know if there’s really much demand for pick-up dishwashing. And the recycling bit was just more of a vague suggestion.

But if any of these four businesses existed, I’d probably use them. (Especially if the bank had an attractive, easy-to-use website where I could do all my banking. OMG, and they could partner with Mint and store the financial information somewhere other than Mint’s servers.)

I know that Nautilus is GNOME’s file manager, but I bet not everyone does. So imagine that your computer randomly locks up and, when you come back, the only thing you get is this message that a program you’ve never heard of can’t start for unknown reasons.

Of course, knowing what Nautilus is doesn’t help. Why is it starting a file manager? Well, apparently, because it draws the icons on my desktop.

But there’s a little “Show more details” box. (Kudos on this, BTW: it’s a good way to accommodate both the technical and the non-technical people.) Here’s what it says, verbatim

Nautilus can’t be used now, due to an unexpected error from Bonobo while attempting to locate the factory.Killing bonobo-activation-server and restarting Nautilus may help fix the problem.

And what does that mean? What factory is Nautilus looking for (is that even a technical term?)? What does Bonobo have to do with it? Why is there no space between “factory” and “Killing,” making it look like it’s looking or a file called factory.Killing?

I like the idea of having a simple error with the option to see the technical explanation. That’s a really good idea, and a great usability enhancement. But some notes:

Maybe it’s a step in the right direction, up from “Error -134239520439: An error has occurred in UNKNOWN” type stuff. But if the error message ‘knows’ how to fix the problem, why doesn’t it do it? And why can’t error messages ever give a good explanation of what happened? What’s wrong with, “Nautilus has failed to start. Without Nautilus, your desktop will not have any icons. Click on ‘Show more details’ to see what happened and how to fix it,” with not just an OK (or “Dismiss”) button, but an “Autofix” button?