Okay, so this won’t fix the Internet, but I think it’s high time that what I’m about to suggest is implemented. It’s not exactly a revolutionary idea that I just came up with. It’s what people have been talking about for a decade.

ISPs need to start blocking crap from originating on their network. The only reason, as best as I can tell, that they’ve done anything about spam is that they were getting ‘collateral damage’ when huge chunks of their networks were being listed as spam havens, causing legitimate e-mails to bounce and really irritating all their customers.

Let’s say that your computer gets infected by a virus that causes it to ping flood a given Internet site. What should happen?  I think there are three courses of action. The ISP can do nothing, which is easiest. That’s the status quo. The second option is that some simple firewall rules could detect that your IP was suddenly generating hundreds of ICMP packets a second, have the system automatically realize that something fishy was going on, and remove you from the Internet, perhaps redirecting all your traffic to page indicating what was going on and how to fix it. Or, third, and easiest of all, they could simply firewall off the ICMP attack you were trying.

A lot of the viruses/worms are super-easy to detect. They try to connect to hundreds of computers at once on an obscure port. That alone is something that no ‘real’ user is likely to do. But you can go even further, and have your firewalls do some Layer 7 inspection. (But ooh, that would cost money, and ISPs don’t like that!) They could look at the ‘payload’ of the data and see if it matched the ‘signatures’ of known viruses.

I’m not proposing that your ISP should have people monitor your every move with packet sniffers. I’m proposing that ISPs implement the equipment that would let it detect blatant abuse of the network, which consumes not only their resources but the resources of countless other networks, and stop letting crap go on. Imagine if, once Nimda was known in the wild, your ISP prevented any incoming attacks from reaching you. And that a few of their clients got infected anyway, but that when they tried to use a web browser, all they got was a message indicating that their computer was infected with a virus that was trying to spread with other computers, so they lost their Internet connection until they fixed it, and, oh, here’s instructions on exactly how to do it.

I suppose some customers would be angry. But I think, overall, it’d be worth inconveniencing a few people who couldn’t keep a clean computer anyway.

(Okay, so Nimda was a bad example since it spread so quickly. But it’s not like it was over and done with by the end of the day.)

The Powerball is getting to levels where I play. So I was looking at real estate. I started looking at Portsmouth, which has some nice places. But then I turned my gaze to Hampton Beach, where I noticed something interesting.

There are a ton of hotels for sale. Like, at least half a dozen. Several of them are big.

The pessimist wonders why there are so many hotels for sale, and whether market conditions in Hampton are poor for some reason.

The optimist thinks that six (at least) hotels all up for grabs is a great market opportunity. There are still competitors, so you’re not really a monopoly, but owning a bunch of hotels surely gives better market leverage than owning a single hotel. Other benefits include referrals (“No, we’re all booked for that weekend–but our sister hotel down the street has openings…”), and a sort of ‘laboratory’: you can implement something in one and see how it works; say, a certain type of renovation, price increases, or changes in scheduling. (Plus, there could be economies of scale if you shared services between them, such as buying supplies in bulk and having handymen who serve all locations.)

I was cleaning my car, and figured that, as long as I’m doing the outside, I might as well do the inside. I found a bottle of ArmorAll, so I used that on the interior.

And then I noticed that the label suggests it can be used on tires. So I tried that. They look much better: they don’t have that absurd “really shiny” look that cars in showrooms and car shows have, but they’re a nice deep black now, and make the wheels look even cleaner.

But then, having doused everything rubber and plastic in my car with ArmorAll, I came inside to use my computer. And got to thinking about the Thinkpad’s top. Anyone who’s used a Thinkpad will know what I mean: it’s a really bizarre consistency, sort of rubberized plastic. It scratches easily, picks up oils from your hands if you touch it, and always looks dirty.

So you can probably see where my mind went: can I use ArmorAll to clean/protect the T60’s coating like I do on other plastics?

I figured that the key would be to not use too much, especially since I didn’t know how it would work. So I sprayed a little on a paper towel and rubbed it in. It ended up still looking like too much, so I used a spare cloth to wipe it down, going in circular motions.

I’m on Day 1 so far, but I’m currently very happy with the result. It’s a nice solid consistency, albeit slightly slick. It looks, well, clean, and at least as good as when it was new. The edges are already starting to look a little different (they always have, due to fingerprints where I open/close the lid), but it’s still a definite improvement. I’ll wait a few days and see how it looks then before I decide if this was a good idea or not…

I don’t have any special image-handling code, but here are some photos I wanted to share: 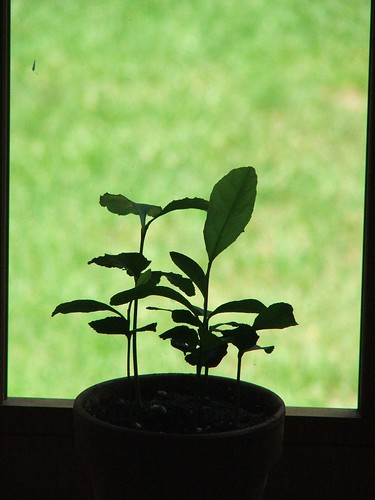 That’s a lemon tree! More accurately, it’s about four lemon plants, a few weeks old. Half as a joke, I took the seeds out of a lemon and put them in some soil. About two weeks went by, and we were just about ready to throw the whole thing out, when one little sprout came through the next day. I now have a total of 11 lemon plants. 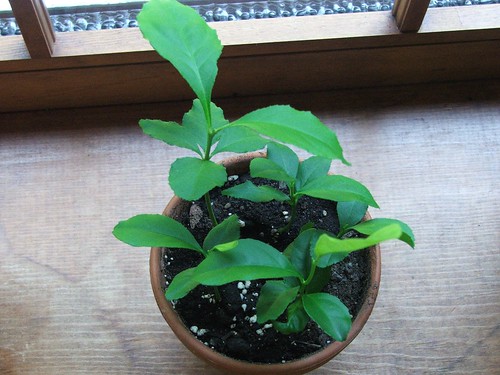 That’s a view from above. I really have no idea how the lemon trees will fare in the winter, although I plan to keep them indoors. 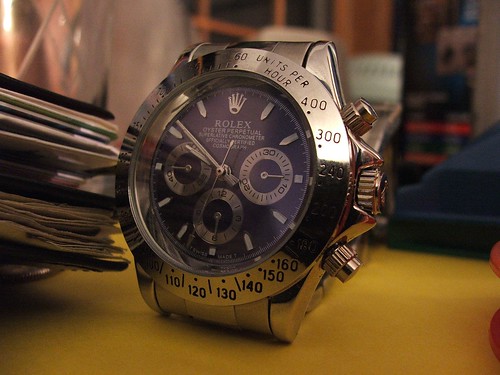 Finally, here’s my latest watch. (I have reason to believe it may be fake.)

Okay, this post is just for those who say that driver support in Linux sucks.

Windows detected that I’d put in a new wireless adapter, but couldn’t find drivers for it. I probably could have found them online, but that’s kind of a catch 22.

I booted the Ubuntu Live CD, and am now posting via the network card Windows didn’t have drivers for.

I went out to dinner with my dad, and we stopped by Staples for a few minutes. While he looked at real stuff, I wandered down the camera aisle and was pleasantly surprised to find, for the first time ever, a Canon digital SLR that didn’t have dead batteries.

It had no storage medium, but allowed you to shoot and review images. So here are my first impressions:

I’m not at a point where I can justify spending $900 on a camera (not including the few grand I’d want to sink into additional, longer lenses), but I can say with certainty that if I did have $900 to sink into a camera, I would have bought it on the spot. (Actually I would have found it cheaper online. But that’s not the point.)

Today’s hero of the day: Apple, for their high-tech iPhone service tool. (God only knows if this is real.)

I realize I’m probably not the typical e-mail user, but I’m constantly amused at how pathetic phishing e-mails are. So this is a public service announcement… Don’t trust e-mails:

When convincing looking e-mails come in purporting to be for a bank trying to ‘confirm details’ after ‘a problem with your account,’ I can see how some people might fall for it. But when the Central Bank of Nigeria is trying to deliver you $15 million in cash for no apparent reason, but needs your bank account information first? And the e-mail is littered with misspellings and just nonsense? How could anyone fall for that?

Am I the only one amused by the ongoing stories about people breaking into buildings to steal the pipes, because scrap metal prices have skyrocketed? The whole thing is just bizarre: I’d expect thieves to be stealing TVs or cash, not copper pipes. Like this guy in Chester.

Will someone let me know if the scrap value of pennies exceeds their face value? I have a lot.

Watch him as he goes.