Tonight Oprah and Obama spoke at the Verizon Center. I went, both as a fan (of Obama, not Oprah) and to try to get some great shots.

I’ve heard Obama speak before. He’s really good. I went in tonight with Obama being my likely pick, but with Edwards still having some chance, and with the idea that Richardson would rock, too, but that he doesn’t stand a chance right now. I came out convinced that, without a doubt, Obama’s my guy.

Oprah also turned out to be an amazing speaker. I generally don’t have anything positive to say about TV celebrities, but she turned out to be great. She spoke about how, when she’s not on TV, she’ll often say, “Somebody should do something about that…” to all the things wrong in America right now. So, for the first time in her career, she stepped up and endorsed a political candidate, the one she thinks will “do something about that” to all our contemporary problems.

Michelle Obama spoke, too. Granted, she’s biased, but she had nothing but good things to say about her husband. She spoke about how when she first met him, they were both lawyers. While she was focused on wanting to be the next millionaire with her law degree, Obama received his degree and then went into destitute, rural areas to help.

And of course, Obama spoke. While he called himself the third-best of the three when it comes to speaking, his speech didn’t disappoint. Hearing him talk almost gives me goosebumps. I’m so focused on all that’s wrong with America: millions don’t have health care (as soon as I graduate from college, I’ll join the ranks of the uninsured), we keep botching things like Katrina, maybe because all of our National Guard / military is tied up with Iraq’s civil war. Our economy heads further south and shows no signs of stopping…

But when he talks, I suddenly have a vision of what America should be: veterans coming back from Iraq receiving a hero’s welcome and receiving veteran’s benefits, restored relations with the world community, health care for everyone*, the end of a pointless war, and the end of the clash between blue states and red states–a United States, if you will.

So why is my post entitled Misery? Because my camera died.

Here’s Cameron, a 10-year-old student, reading a letter to Obama, imploring him to provide more aid to the autistic: 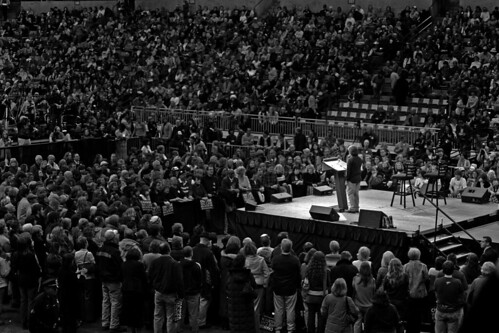 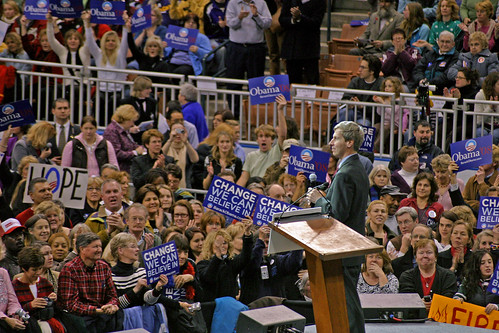 There’s our beloved John Lynch addressing the crowd. We were near the back of the Verizon Center, so we didn’t have the best angle, but I knew from past experience that Senator Obama was very cognizant of the fact that the crowd wasn’t just directly in front of him, so he would turn around and make sure all the crowd got his attention. So I was excited. Obama would surely come around to the other side of the podium at some point, and I’d get some great shots. The lighting was good enough that I was getting 1/100 and better shutter speeds at ISO800 (on a slow f/5.6 lens); the only thing I could have wished for was a faster lens to throw the background out of focus a bit more. But I was golden. A lot of people say photography’s all about light. To me, it’s all about angles. And we’ve all seen head-on shots of politicians. They’re boring. I had a good perch.

So, you might ask, where are all the shots of Oprah, or Michelle and Barack Obama?

For a lot of people, it’s a bad connection between the camera and the contacts on the lens. For others, it’s a CF card error. But I tried it all in vain. I “reseated” the lens. No luck. I tried taking a shot with no lens. No luck. I tried shooting without a CF card. (That wouldn’t do me much good, but it’d tell me if the CF card was the problem.) Still Err 99. I tried reseating the battery, which apparently sometimes resolves the error. No luck. I even took the battery out and removed the little CMOS battery. No luck.

All indications are that it’s the worst possible fate: a shutter problem. There do look to be some small scratches on the shutter, although I wasn’t about to stick my hand in and try. (Because then it’s guaranteed to become a shutter problem…) The shutter isn’t really user-serviceable. Taking the camera apart is very involved. You have to send it back to Canon, for what’s apparently a $200 repair.

The worst part, though, wasn’t sitting there knowing that my pride and joy of a camera had just become little more than a paperweight. It was knowing that I was missing some great shots. Initially, I kept just powering it back off and on trying to get some good shots. As Obama walked out, there was a huge sign blocking a lot of people from seeing him as he walked out. So he ducked down and waved underneath the sign. I had a nice, clear shot, and was at 1/100. I clicked the shutter. If all I had gone well, I’d have held it down and gotten three off in rapid succession, ensuring that at least one came out well. But all didn’t go well. Err 99. I got nothing.

A bit later on, he was speaking, and I noticed that Michelle Obama had her arm across Oprah’s back as they sat there. 200mm was just enough length to just about fill the frame with the two of them and Barack at the podium to the left. Err 99.

I spent a long while trying to see if I could resuscitate it, but eventually gave up.

* Before you fault this for the cost, consider that we’re spending many, many billions more than any nation in the world. As President Clinton remarked last month, if we were to put all the other country’s health care systems up on a board, throw a dart and pick whatever it hit, we’d save billions. And yet, despite paying billions more than we should be, we can’t even cover everyone!