Today was one of those days where we “almost” had a storm about three times. I was desparately trying to get the lawn cut before it’d start… And then the dark storm clouds loomed, and I’d frantically pull the tractor into the garage and admit defeat, only to have four raindrops fall and it become sunny again.

After a while of this flip-flopping weather, it started to rain for real. And then I kept hearing loud clicks on my air conditioner, when I realized it was hailing. I went onto our (covered) front porch for a while to watch the storm, and grabbed some pictures. 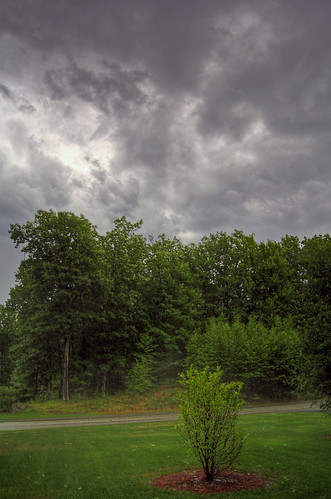 This is actually as the storm retreated, but the clouds look pretty fierce…

You know that point where it seems like it’s raining as hard as it possibly can, when it’s absolutely pouring out? There seems to be an upper limit to just how hard it rains, and we spent several minutes there.

And then, in the blink of an eye, the volume of… stuff… coming out of the sky must have tripled. In addition to the torrential downpour, it started hailing again, this time with great intensity. 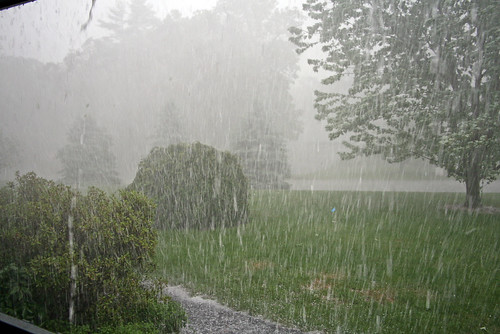 You can see the accumulated hail on the walkway.

The temperature dropped quite drastically, too, going from close to 80 to close to 60 in a matter of minutes.

Here was an HDR capture of the hail falling, which seems to lose some of the intensity: 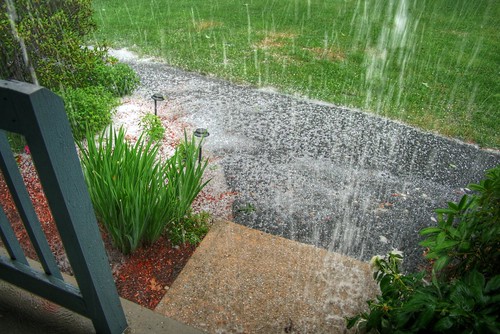 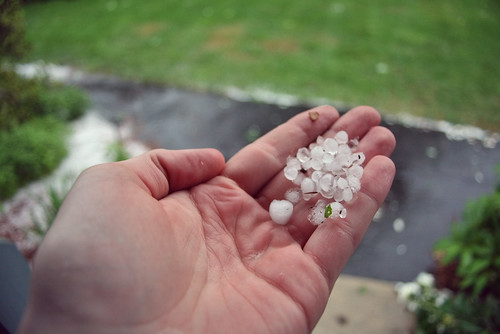 The hail was pea-sized, but boy was there a lot of it. This is after the rain had subsided… Also note that massive distortion on my hand caused by taking such a close shot with an 18mm lens.

Of course, now it’s gone from pouring to boring. :'(

One thought on “What Awesome Weather”