I joined my family today in central/Northern New Hampshire. It was opening day at Clark’s Trading Post, a favorite of my brother. My brother encouraged me to go with them, and the forecast called for a decent day, so I figured I’d tag along. The area’s always been quite photogenic, and I figured it’d be a good chance to continue my exploration into HDR. 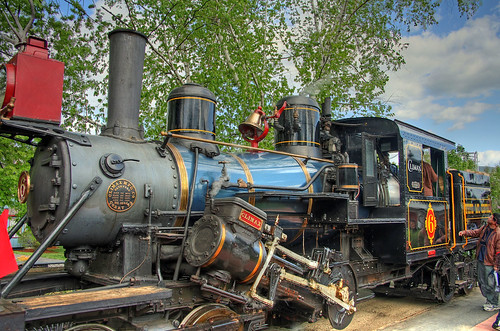 That’s the train at Clark’s. This is what I like to think of as a halfway-decent HDR shot: a close inspection will reveal some technical flaws, but it’s normally a difficult subject to shoot well. It’s largely a black train, glossy in parts, matte in others, but it also has shiny metal highlights, plus the sky. This isn’t to say that it can’t be photographed, just that the results are ordinarily less than stunning. What I like about this shot is that your first thought isn’t, “What type of surrealist artwork is this?!” As seems to be typical of my shots, the sky looks kind of wonky, but overall, I’m happy with the shot. 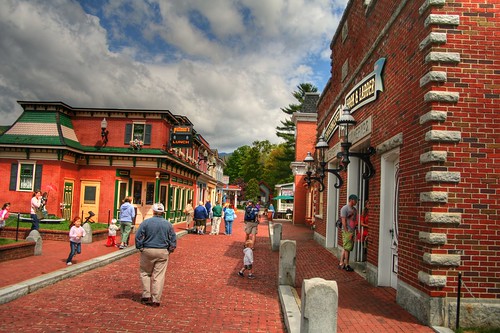 There’s an example of the type of stuff I’m still on the fence about. It’s just kind of jarring in a way, as the colors, while “correct” in a sense, are unnatural. Rather than correcting for the fact that the camera can’t capture the whole scene the same way the human eye might, it goes further and does something even our eyes can’t. It’s a little surreal, but the style is growing on me. (Trivia: look closely and see how many things you can spot wrong. When stitching together multiple photos in which people are moving, things are bound to not quite match up right. They’re fairly subtle in this photo.) 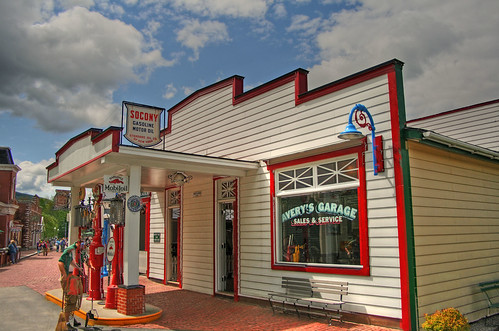 There’s another building, again showing the more “legitimate” aspects of HDR photography in my mind. (Besides the ghostly half-man.) This would ordinarily be a lighting disaster. The building was receiving what was almost direct sunlight, while a dark shadow existed. And the sky was somewhere in between. In this case, I think the blended exposures work perfectly. The same goes true for this shot: 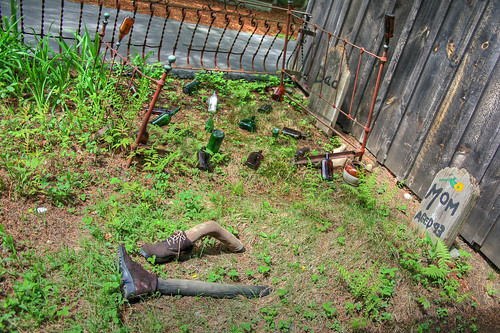 I didn’t know how it’d turn out at first… It looks like a simple shot, but it wasn’t! My typical method is to set my camera up for auto-bracketing, taking three shots in a row, one properly exposed, one too dark, and one too bright, thus increasing the odds that there’s a good shot in there somewhere. Often the main one looks good, but I know that some of the details from the others will boost it when converting to HDR. In this case, though, none of the three worked. If the bottles looked good, the wooden headstones were washed out. If the wall looked good, the grass was far too bright. I had a nicely-bracketed set of three bad photos. Fortunately, Photomatix worked it magic and produced a good shot.

We eventually tired of Clark’s and went exploring the area. Lost River was nearby… I pondered what lens to take, since it wasn’t practical to carry all of them, and made the right choice to bring my wide-angle 18-50mm lens. And here I realized that shooting for HDR, much like switching to using two computer monitors, starting to carry a cell phone, or buying high-thread-count sheets, is a habit that rapidly becomes very hard to break. I’d take a “normal” shot, but realize that parts were under- or over-exposed, so I’d retake the shot as a bracketed set of three, and spent some time in the car ride back home on my laptop merging them. 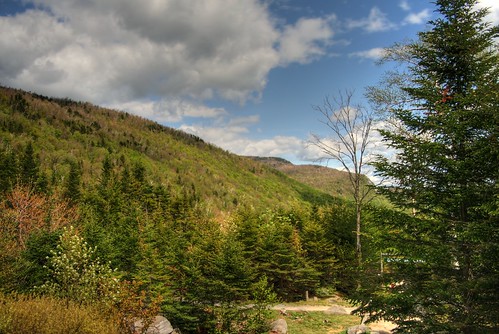 This is at the Lost River section; hardly the best shot, but a quick-and-dirty example of an ‘acceptable’ use of HDR. The trees are well-lit, and so is the sky. Difficult to pull off with one exposure, but a piece of cake with three and HDR!

As we went along, I noticed various parts of running water. (I thought this was a lost river… Pretty easy to find.) I’d never actually taken the stereotypical long-exposure moving-water shot, so this served as a good opportunity. I set the camera to ISO 100 (pretty insensitive to light, very low noise, but meaning slower shutter speeds), and stopped the lens down to f/22, which gave me about a one-second shutter speed. I set the camera down on a railing and pressed the shutter. Viola!

But I was curious… How would my newfound obsession with HDR play into this? Could you “bracket” that type of shot, and merge them with any success? 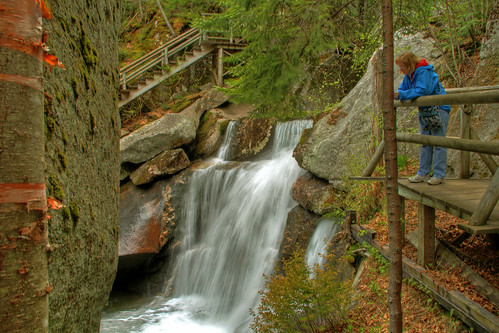 I actually didn’t expect this to work, but it ended up being one of my favorite shots from the day. The shots were something like 1/3 second, 1 second, and 2 seconds, so I expected that the water / person would have moved too much. As luck would have it, they didn’t, and the result was that shot. (A nice side-effect is that I rarely remember to stop the lens down for landscapes, but I necessarily did here… At f/22, everything, in theory, is in focus. Although if you look closely, you’ll notice that some of the photo is kind of soft where things got matched up slightly off-kilter.

We then went to the Indian Head Resort, where, in a welcome break from $15 admission tickets, we paid 50 cents to climb the tower. (In hindsight, they should have paid me to climb that thing!) 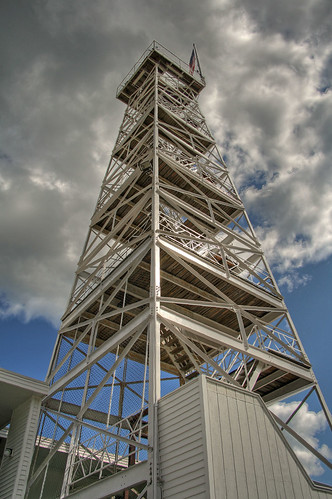 Doesn’t it look big and scary? Nevermind that I used a wide-angle lens feet away from the base to distort the perspective, nor that I made it an HDR exposure to boost the ominous dark clouds that really weren’t that ominous or dark. 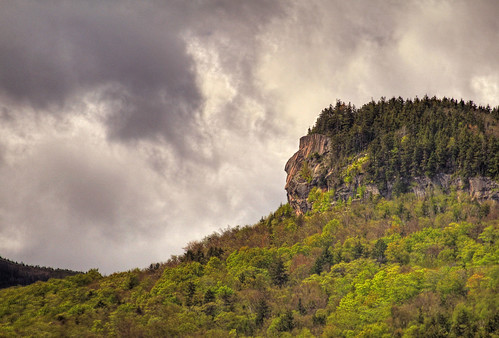 Facing the other way, I decided to take a series of shots holding the camera vertical, intended to be stitched together into a panorama. Since I have under 500MB free on my hard drive (?!) and since I couldn’t find PanoTools or any of its ilk, I ended up trying Windows Live Photo Gallery, which I installed at Mr. T’s suggestion but never got around to using much. (I also brought the image into Photoshop, where I cropped it and tweaked it.)

I’d like to give it good reviews, as it was very easy and quite intuitive. The problem is that I’m fairly certain this isn’t actually how things looked. The pond looks right, but I’m fairly certain that there were more ‘humps’ off to the left. I’m really not sure what happened, but the end result looks good, so I’m happy.