John Kerry gave a speech at Faneuil Hall today, focusing on economics. Between being interested, having been a Kerry ’04 supporter, wanting to try my hand at photographing the event, and having no classes during the day, I decided to attend. What follows is a write-up of the event, a combination of photography stuff and politics.

I was worried when I found out it was inside. I have a fairly “slow” lens (f/5.6 when zoomed in, which I knew is where I’d be shooting), so I wasn’t sure how they’d come out. It ended up being fairly bright inside, but shooting zoomed to 200mm still requires a fairly fast exposure. I left the lens wide open (which has the added benefit of helping to throw the background out of focus) the whole time, and bumped the camera up to ISO800. (I spent a little time at ISO1600 to try to get some “safety shots,” figuring a little grain was better than motion blur, but I can’t even tell without looking at the metadata which was which.) 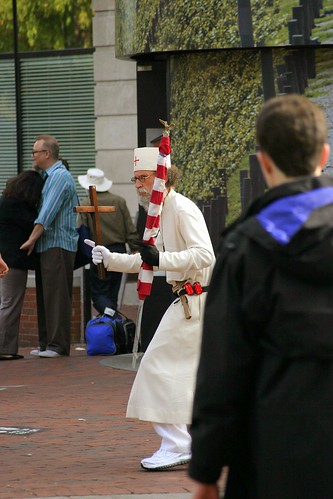 This is not John Kerry, but I’ve still got a few photos uploading so I’ll start with those that are already online. This guy was marching around Harvard Square ranting about his dislike for Jews. I kind of wanted to get into his head: momentarily pretending that hating Jews isn’t crazy in and of itself, I have to wonder what possesses someone to dress up in a ridiculous costume and try to convince a ton of other people that they should hate Jews, too. Does this guy have a job? Is he sane in other settings, or is he always like this? Does he go to the grocery store to buy eggs and ham and rant to the cashier about Jews? Does he have a wife? What’s going on with the couple beyond him to the left?

Upon seeing this guy, someone near me wondered aloud, “Can you say that in public?!” This guy must not have gone to our school, because just a few weeks ago, we handed out about 1,000 copies of the Constitution. He wouldn’t have had to read far, even: we put that part right up front for him. 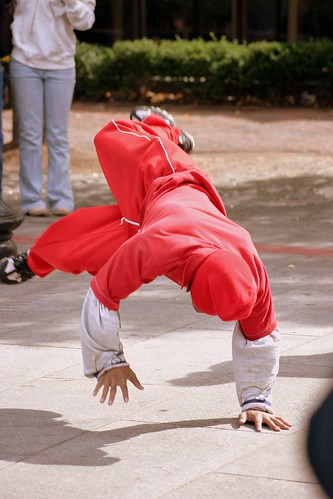 These guys (there were several) were dancing (?) outside Faneuil Hall. Really off-topic, just thought it was neat. 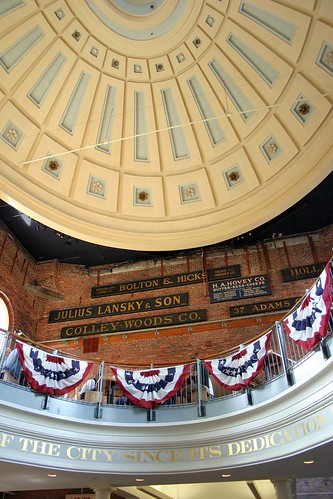 I had lunch in Quincy Market. Since I was by myself and didn’t feel like looking for a seat, I ate at one of those bizarre troffs tables. I took this shot with my 18-50mm lens, at 18mm. Even with the camera’s crop, 18mm (effectively 29mm) is really wide! This picture should also go in textbooks that talk about barrel distortion. 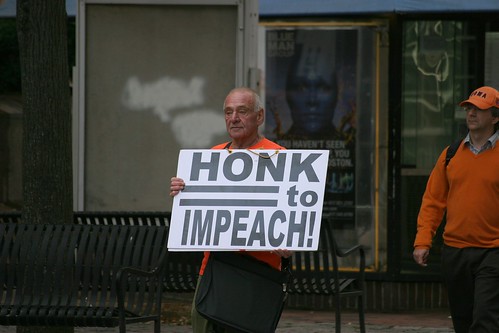 What are the odds that everyone here would be in orange? (It was pure coincidence.) I really like seeing that it’s not just young college students calling for Bush’s ouster. 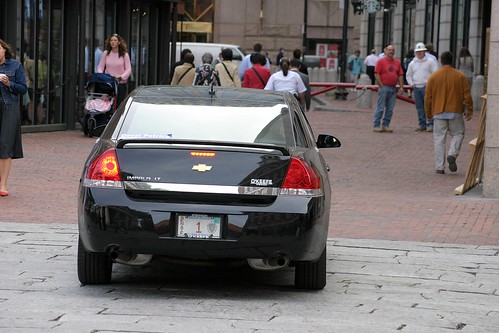 I think this is Kerry’s car. It’s a Massachusetts Senate plate, number 1. I didn’t see him in it, though. 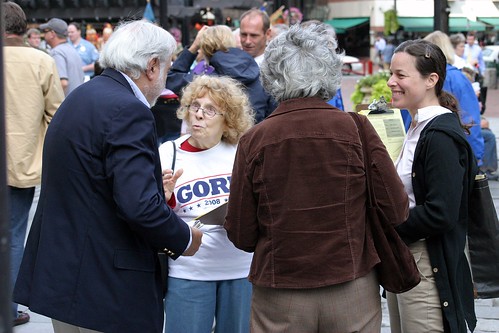 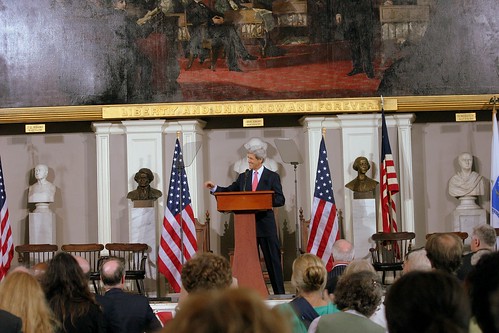 The room was really impressive, and was a great place to hold something like this. Of course, there was no shortage of flags. The inscription on the bottom of the pictures behind Senator Kerry reads, “Liberty and Union Now and Forever.” 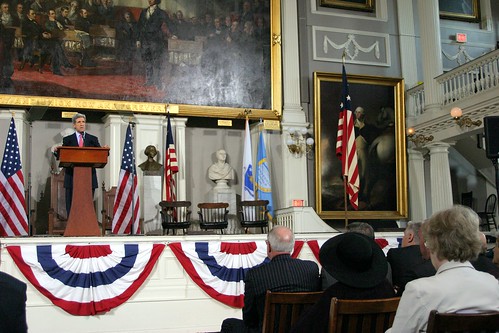 One of the central themes of Kerry’s address was how terribly the middle class have done (tax-wise) during Bush’s regime. 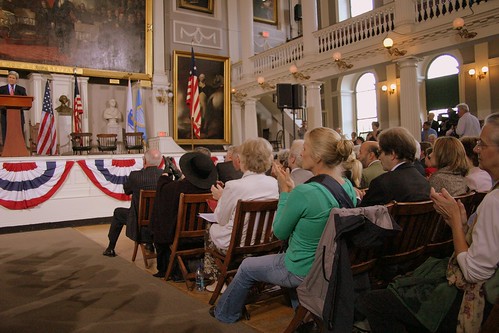 This breaks one of the cardinal rules of photography. You want the subject looking “in.” It’d have been great had he been facing the right (his left), but he wasn’t. Also, at least for me, the object that my eye jumps to is the woman in green, who was just some random audience member. 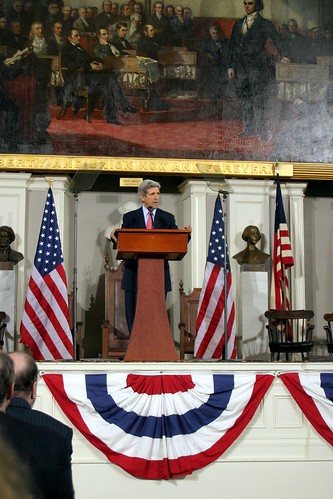 The enormous picture behind him wasn’t level. Another “cardinal rule” I’m big on is keeping straight lines. I’m more prone to noticing than most people, but when the horizon is slanting, it really detracts from the picture. I realized early on that my pictures were coming out pretty crooked, so I started being careful to try to keep the bottom of the frame nice and level. But on more zoomed-out shots like this, the stage was pretty slanted. I’d love to fix the alignment of the painting, but when I try aligning pictures on walls, they tend to fall off. I think I’d be in pretty deep trouble if I knocked that painting down. 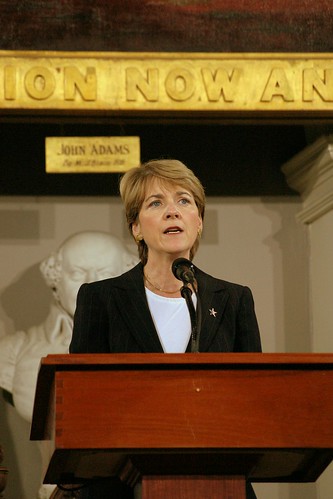 Attorney General Martha Coakley, who, surprisingly, doesn’t have a picture on Wikipedia. I think I’ll remedy that! 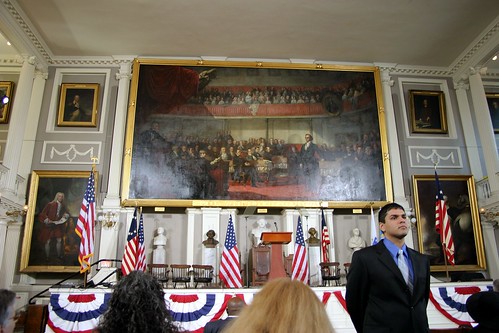 Here’s the room. It’s on the upper floor of Faneuil Hall, and is incredibly nice. (This was a little before we started; the guy on the right is an usher.) 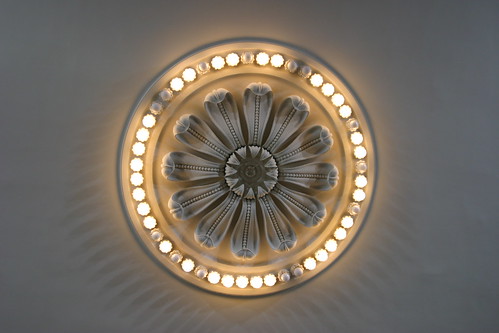 A light on the ceiling. (After fixing the crooked painting, they could maybe replace some of the bulbs.) 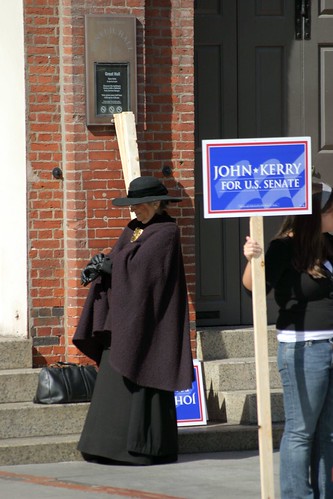 Any idea who this lady is? She was right near the front and a lot of people were coming up saying hello. I’m assuming she’s either a former politician or wife of a politician, but I didn’t recognize her. 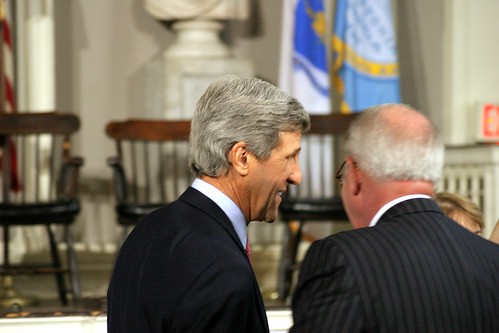 Kerry greeting someone on his way to the stage… Another ‘VIP’ in the group.

See what I mean? Here I aligned the image so the stage was perfectly level. Look at that sloping painting! Isn’t it distracting? 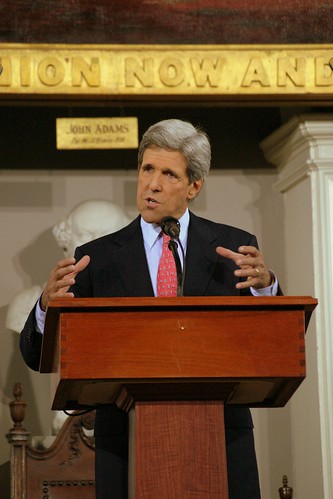 He then added, “Man, if I saw him today, I’d…” and trailed off with an angry hand gesture. 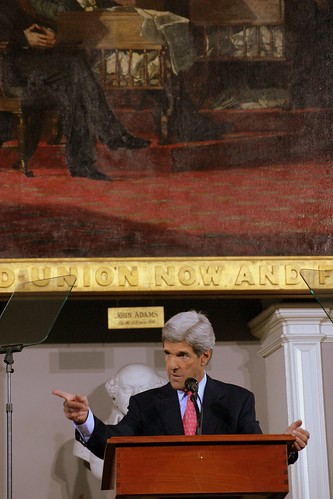 He also discussed tax cuts and the preposterous situation of giving the richest Americans huge tax rebates. “Teresa and I didn’t ask for a tax break. We didn’t need one, especially not when 43 million [?] Americans can’t afford basic health care.”

I’m not sure I did such a great job going over what happened, but it was great. My one critique is that he seemed a little too quick to bash Republicans: it’s something most all Democrats are quick to do, but unless we start working together, the schism is going to get wider. We need to work with the Republicans, not against them.

One thought on “Kerry”