Because I’m always looking for an excuse to buy a new radio, I’ve been looking at the various VHF-and-up digital modes in use on the ham band. There are a multitude of them in use.

Going by New England Repeater Directory’s 2 meter page, here are the number of repeaters listed for each digital mode:

(To be clear, that is just on the 2-meter ham band in New England.)

DMR drew my interest because it’s the most widely deployed in the region (NEDECN, etc.), by far. (More than the next two combined!) In part, this is probably because groups like NEDECN and EWARN, as well as the the international DMR-MARC group. They link up repeaters over the Internet (primarily, at least), making it a wide-area network. (This linking isn’t unique to DMR. It’s not even really relevant to DMR per se; it just happens that all or nearly all of the local DMR repeaters are linked. D-STAR repeaters are similarly configured from what I’ve seen.)

DMR is also interesting to me because it’s a two-slot TDMA system. Put more simply: in digitizing the user’s voice, it captures 60ms segments of voice from the microphone, converts them to digital format, and then transmits them in 30ms of airtime. Therefore, a single frequency can carry two conversations simultaneously. They’re dubbed slots, and many of the aforementioned ham repeaters will carry a local talkgroup on one slot and a larger-area one on the other. Users select which they want as if they were changing channels. (Another fun aspect of this: battery life is said to be improved about 40%, because the transmitter runs half as much.)

The other thing I think DMR has going for it is that it’s an open standard (ETSI) with a lot of commercial gear from a number of manufacturers. That serves to drive down cost a bit. DMR isn’t entirely unique here, but it seems to be the cheapest path.

As with some of the other digital modes, DMR supports things like one-to-one calls (though the operators of the networked ham repeaters ask that it not be used there) and sending of text messages / data.

So, I decided to jump in, and ordered a radio off eBay: 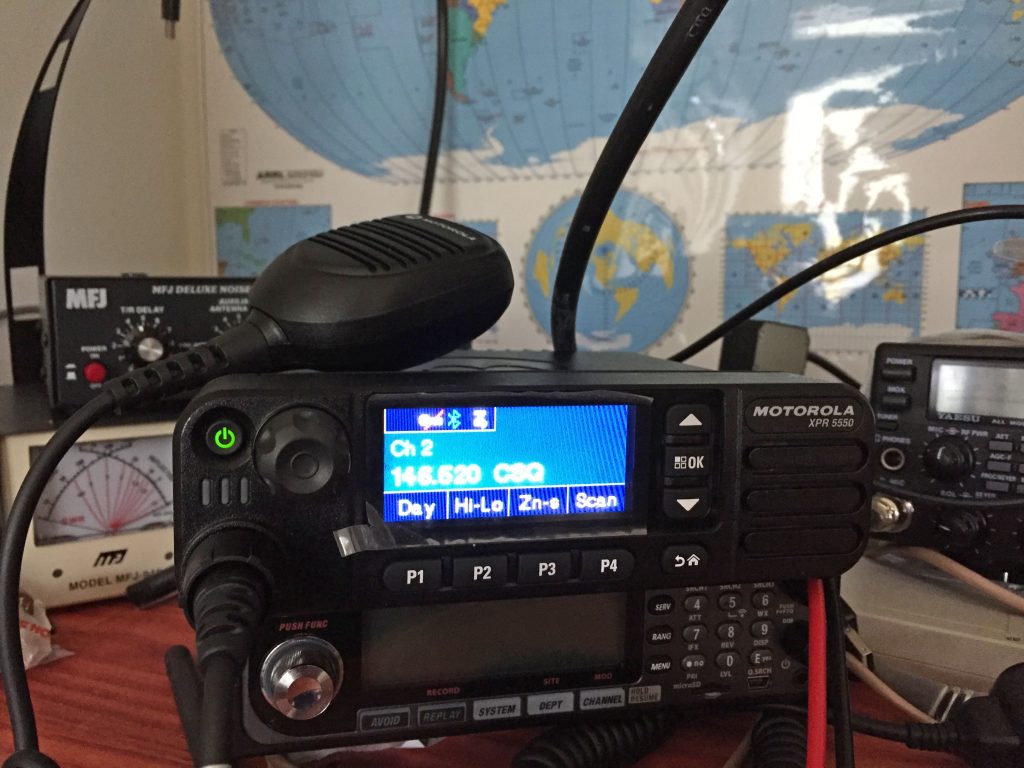 It’s a Motorola XPR 5550, VHF. Interestingly, it also has a dedicated GPS receiver built in.

I’m now onto my next challenge: obtaining the programming software (CPS) for the thing. Because it’s a commercial radio versus something targeted at hams, it’s not easily programmed. (FCC Part 90 regulations intentional forbid allowing users to enter their own frequencies, for example, since in many cases that would wreak havoc.) For some reason, Motorola insists on selling the software through Motorola Online (MOL), which requires that you request an account and wait days for it to be manually provisioned. They also, frustratingly, charge close to $300 for it.

The software is floating out there for illicit download, but I want to do this right. Also, this being a newer commercial rig, it only supports “narrowband” 12.5 kHz channel spacing out of the box. Ham radio has not narrowbanded, so this is undesirable. Motorola offers a free “entitlement” to enable legacy 25 kHz channel spacing, but getting it apparently requires an active CPS subscription.

So for now, this really slick digital radio sits on my desk, monitoring the pre-programmed 146.52 2-meter calling frequency, in analog FM. I can’t wait to get this to do a bit more!