(No, no, I’m not actually selling anything, and this isn’t spam. But some of us have been parodying the weird “One weird trick” ads that no one understands. I did it in my post about getting NFS working, and my friend and colleague Tomas introduced his Gerrit expand comments bookmarklet as “one weird trick” to make it more usable. This one is about batteries.)

For years, I’ve been plagued by what to do about the things I own that use AA/AAA batteries. On one hand, disposable batteries are really convenient, because they last years in storage, and are always ready. But the idea of throwing away batteries weekly becomes morally objectionable the more you think about it. On the other hand, you have rechargeable batteries. They can be used hundreds of times, solving (or at least exponentially reducing) the disposal issue I have. But I’ll often endure a wait of a few hours when the batteries in something die and I have to go hastily recharge them. So often I’ll charge things when the batteries aren’t really all that low, so that they won’t run out at an inconvenient time, and that’s just a hassle.

So the “one weird trick” is simple: buy a ton of Eneloop batteries, more than you need, and use them first-in, first-out. Throw depleted batteries on the charger as you grab the new ones to ensure you never run out. It’s the best of both worlds. You always have fully-charged batteries on hand, but instead of throwing the depleted ones in the trash, you put them in the charger. Here it is in a diagram: 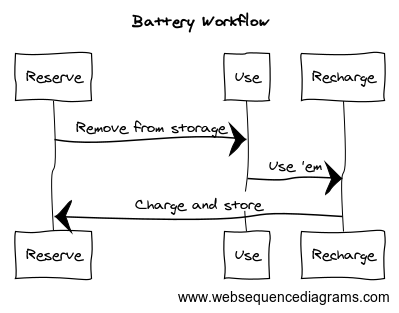 I really can’t begin to describe how incredible this is. It’s like this amazing luxury I have. But there are some things I figured out along the away:

Eneloop batteries are really expensive. $2-3 per battery. But this is absolutely a case of paying for quality. It’s also a wise investment—you’re going to use these hundreds of times, such that the per-use cost of each battery is probably under a cent. I highly, highly recommend the Eneloop brand. There may now be other low-self-discharge batteries, but I haven’t tried them. Whatever you do, be absolutely certain that batteries can last a month or two without losing much of their charge before you buy them. It is a complete waste of your money otherwise.

I highly recommend some specifics, too:
* A good charger. I have, and would recommend, the LaCrosse BC-700. It is not particularly intuitive to use, but it’s not too tough to master. It allows you to discharge and then recharge batteries, which can help extend capacity early on. ([citation needed] on that, but I’ve read it multiple places.) However, this is just the model I bought and that I like; any quality charger should work fine.
* A container for the batteries. I don’t have a specific product recommendation here, though the linked set is good. (Note that some retail-packaged Eneloop batteries come with these, so you might not need to purchase them separately.) I have a container that holds 8 that I use for my main reserve set, spilling over into 4-packs when it fills. I do recommend that you get one that only holds one layer of batteries, to make the first-in, first-out system easy and intuitive. Take batteries from the right, and insert from the left. No worrying about top and bottom rows or anything. Really any container will do, but don’t just leave them lying around or it will just become a mess and you won’t know what’s what.

This all sounds so silly, but it’s incredibly useful. I would never go back to any other system.