Today, I will be the loser who blogs about gardening. 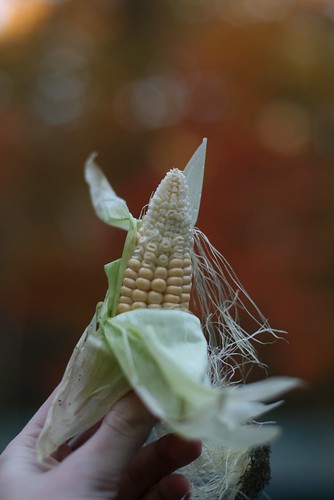 One day this summer, I found a package of corn seed and decided to plant it. Since I’d had bad luck germinating things in the past, I put dozens of seeds in the ground. Most, if not all, of them ended up growing. Since I’ve never grown corn before, and since I only planted corn after happening across it in the garage one day, I ended up planting it far too late in the season. While the corn grew quickly, it was planted late enough that it never got more than about four feet tall. I left it as long as I could, but after a few frosts, I picked it today. The plants had yellowed.

I ended up picking about 20 ears of corn. They were all a lot smaller than they should have been, perhaps 6″ long, and as the photo shows, the corn hasn’t grown in fully. I’m not sure what to do with the corn at this point, but it’s sitting in a bucket. I’m thinking I could let it dry and try to plant it next year. I still have half the bag of seeds, so I could end up growing a considerable amount of corn.

A bit of advice I read on planting corn was to space the plants with at least a foot between each plant. I had eight seeds planted in the same hole. The roots seem to have intermingled, leaving one big clump of plants. The few individual plants didn’t grow any taller or produce bigger ears of corn, so I’m not sure that planting corn more densely than recommended is really such a bad idea.

Earlier this year I cut off all the shoots from our lilacs. There must have been at least 50, each just a few inches. When the cold weather was closing in, I planted the cut-off shoots/root sections in the ground, figuring that the pots would freeze. Somewhat to my surprise, the plants are still green. If they make it through the winter, there are going to be far too many plants. Somewhat curiously, when I initially cut the shoots off of the roots and transplanted them, all of the leaves fell off. But before I could conclude that they were dead and dump them, new leaves started to grow in, and today, the plants seem to be growing.